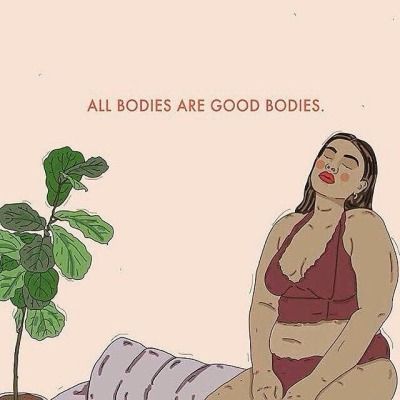 "In owning the parts of me that I so badly wanted to ignore and hide, I've dismantled the shame I've held for years, and began building self acceptance for myself in its place."

The back story: I was born 8 pounds, 8 ounces, and had THICK, squishy baby thighs. Throughout school, I gained weight, was a loner, was "the fat kid," was teased that I was taller than most boys, and fatter than all the other kids in my class. Even at church--a place that was supposed to be safe and loving--I was subjected to hearing subtle rude and critical comments from the preacher about my appearance.

I developed a hatred for clothes shopping and refused to wear high heels, because I didn't want to stand out even more than I already did. I perfected the ability to be invisible, but I wasn't happy. For years I always heard comments like, "Dress for your body type," "Be more modest," "Ladies don't wear stuff like that," "You shouldn't wear that," just to name a few. And for years, I was convinced that that's what everybody was told. I had always been fat, so it became a daily routine for me. Even people I considered friends poked fun at me and teased me for being overweight.

Over time, these comments and behaviors of others culminated and contributed to a toxic relationship with myself. I dreaded looking in the mirror; I refused to compliment myself in any way whenever I changed clothes or got ready to shower; I was shy and embarrassed easily whenever anyone commented on my appearance; and I had no confidence in any part of myself. Up until a few years ago, I still held those views--that because I was considered obese, I would never be beautiful to someone; I would never have someone love me; I would never have a good job; I would never have a family of my own, and my hopes and dreams of having someone to grow old with became distant, dim, and depressing. I've struggled often with mental health issues, but it was around this time that I dove headfirst into a dark and hopeless existence, and it was here that I contemplated thoughts of suicide. "Would anyone really miss me?" I wondered. "I bet no one would really care if I wasn't here." These thoughts, while never progressing past the contemplative stages, grew into a need for male attention. No one ever really stuck around, so this fueled my self-destructive thoughts that no one thought I was worthy of love or attention. Then I developed an emotional connection with a man I'd started talking to online; he was sweet, funny, charming, in his 40s--but age wasn't a huge issue to me. Time passed and I learned he was married--didn't matter. He was still kind to me, paid attention to me, showed me compassion and care and love. He invited me on business trips with him, offered to send me numerous gifts--all of which I refused, because of my lack of self confidence and the inability to face him should he ever spontaneously visit. I continued this emotional affair until I realized something. I got the love and attention I wanted, but at what cost? I remember looking through his Facebook photos and seeing his family--how happy they looked. I instantly felt guilt, regret, shame, embarrassment, and hatred toward the person I'd become. So I broke it off, only to be met with hostility and indignancy. I realize that I was only the object of his affection and attention as long as I played by his rules. Lesson learned.

I remember telling my mom what happened (because even she and my dad noticed for weeks that I was different), and I broke down sobbing. I didn't recognize myself anymore. She hugged me sympathetically, talked with me about the affair, and life went on as usual.

While my feelings toward myself and my body were still negative, majoring in psychology, doing my own self-research, having a solid support system of friends and fans, as well as following many other body-positive plus size women on social media eventually helped to have a healthy body image of myself and realization that society's definition of beautiful is far from the actual meaning of the word.

Within the past few years, I've discovered more about myself, and am more comfortable with myself and my body now than ever before. I try to be healthier and take care of my body, but I also love myself as I am. I realize that there's a lot more to me than just a number on a scale. I can strut around comfortably in underwear or a bikini and feel just as confident as I would in a pair of sweatpants and a sweatshirt. I take at least one body photo a day and multiple selfies, and point out at least one thing I love about myself, and I encourage you to do the same.

Even now, when my partner tells me he loves me, I have periods of doubt, but I realize that's because I've lived so long in a period of darkness, depression, and insecurity. But I remind myself of who I am, what I've done, look to my friends for encouragement, and realize what a queen I am.

If you take anything from this post, I hope you take this: Whatever size you may be, you are enough; you are beautiful as you are, and I hope you take pride in that fact and in who you are as a beautiful human being. Flaunt that tummy, get that bathing suit, buy the dress, take that photo. Your weight, nor any other physical aspect of yourself, fully portrays the wonderful person you are. Other people will try and tear you down (and will be successful), but I hope and pray you can find motivation and determination in that. A number on a scale does not define you, and no matter what size you may be, you should feel confident in your own skin. And as one of my favorite comedians, Tim Hawkins, stated, "Be a twinkie in a ding dong world," because no one is better at being you than YOU.

The Termination of Rumination
Change Comes From Within